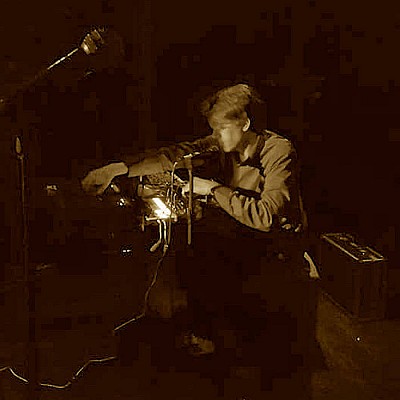 I have been making music under many different names: 'namke communications', 'field memory recorder' and 'tuffen'. I am also a member of a few more groups: 'Orlando Ferguson'; 'ElectroBattlingDroids'; 'Neuschlaufen'; 'The Wharf Street Galaxy Band' and 'The Wonkystuff House Band'.

I was born in the 60s and grew up through the home computer boom and the miniaturisation of everything. Moved to York in the early 90s to study Music Technology (and start collecting synthesisers and drum machines!). I've been making electronic music since the 90s and performing since around 1996, in the last five years or so even moving back to using guitars again! Lots of my music is improvised, going on to a stage with nothing particularly planned is fun!

I've been interested in electronics since school, very much looking forward to integrating some of my 'wonkystuff' work in with the AEModular system!

Also the following projects on Bandcamp:

Something I'm still pleased with — a brief foray into film-making & sound-tracking:

Too much gear collected over the years:

and a few more, including kit-builds such as the Jasper and Brunswick synthesizers (a 9090 is currently in progress)

<-- Back to Artist Index

This page is part of the index of artists of the AE Modular community. If you perform and record with your AE Modular system, then we would love for you to be featured here as well. Please read the information about how to join in this post on the forum.